TOGETHER is a United Nations campaign that promotes respect safety and dignity for refugees and migrants. Launched in September 2016, its aim is to counter the rise in xenophobia and discrimination.

TOGETHER is a growing coalition of Member States, private sector, civil society representatives and individuals committed to change negative narratives on migration and to strengthen the social cohesion between host communities and refugees and migrants.

Find out how you can get involved

Syrian refugee children get ready for school in Hatay, Turkey.

“Our duty to the people we serve is to work together to move from fear of each other to trust in each other. Diversity in all its forms is an asset, not a threat.”

In the New York Declaration, all 193 UN Member States unanimously welcomed TOGETHER and committed to implementing the campaign. TOGETHER will run until the signing of two separate Global Compacts, one on Refugees and one on Migrants, in the second half of 2018. These compacts seek to regulate how the world will address large movements of people.

Secretary General remarks on TOGETHER

Listen to refugees & migrants talk about their experiences

UN Summit for Refugees and Migrants 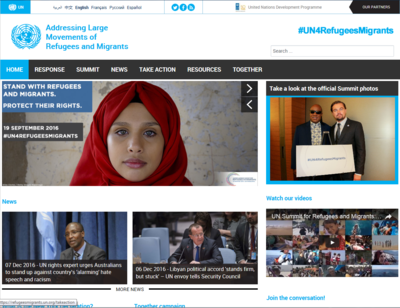 Find out more about the UN Summit for Refugees and Migrants