All "Together" for World Refugee Day

All "Together" for World Refugee Day

The United Nations High Commissioner for Refugees (UNHCR) registered a record number of 65.6 million displaced people due to conflict or persecution in 2016, including 6.9 million individuals displaced within the borders of their own countries and 3.4 million new refugees and new asylum-seekers. These record figures stress the importance of solidarity and the urgency in reaching global peace.

"For the millions of people who cannot return to their home tonight because of war and persecution, World Refugee Day is also a moment to ask ourselves what each of us can do to overcome indifference and fear. When we stand together #WithRefugees, we also stand for respect and diversity for all.” Filippo Grandi, UN High Commissioner for Refugees

On World Refuge Day, held every year on June 20th, the world commemorates the strength and courage of these millions of persons forced to flee their homes and the compassion of those welcoming them. It is the perfect time to show that public opinion is behind these forcibly displaced families and to highlight the many positive aspects for both refugees and their countries of destinations.

In order to change negative perceptions and attitudes towards refugees and migrants and fight against racism and xenophobia, the United Nations launched an overarching initiative last September, known as the Together campaign.

A Together app is now available for storytelling and reporting of people’s actions to support the campaign. “With this mobile app, we can focus on human stories and share them easily on social media” Leonard Doyle, Director of Communication for the International Organization for Migration (IOM).

One initiative organised this week in Brussels and around Europe is the Refugee Food Festival. Some restaurants are opening their kitchens to Chefs who are refugees. This initiative was launched by Food Sweet Food and co-organized by the United Nations High Commissioner for Refugees. 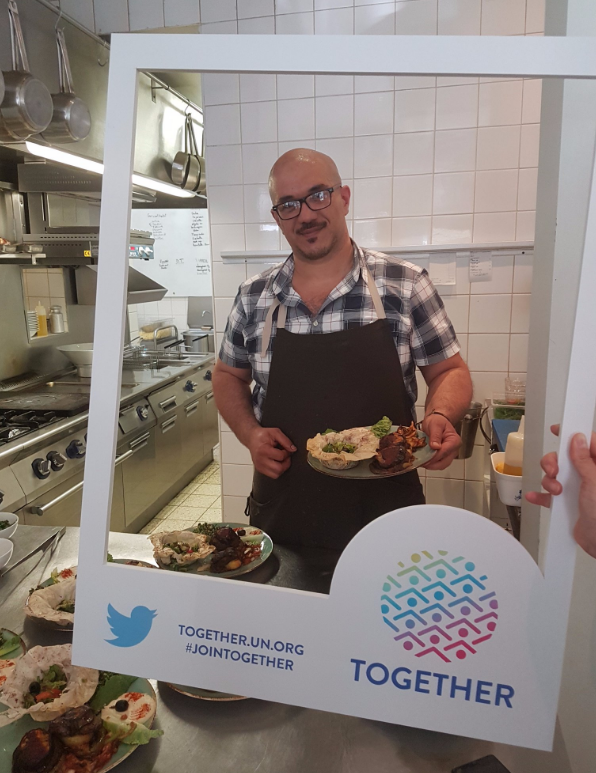 In Brussels, eight restaurants have decided to welcome a new Chef for the week. The festival counts on the power of food to change perceptions of refugees, accelerate their professional integration, and facilitate the discovery of cuisines from all over the world. All Chefs are confirmed cooks in their respective countries wishing to integrate socially and professionally thanks to their cooking skills.

“At times of crisis and war, solidarity is a huge gift. It is now time to re-establish the integrity of refugees and to work Together on building a better future for all.” Caroline Petit, Deputy Director, UNRIC.